Sometimes, it’s just a matter of offering the right kind of support.

RYTHM Foundation, our social impact initiative, which is based on the principles of Empowerment, Volunteerism, and Resilience, aims to empower lives and transform communities. RYTHM, an acronym for Raise Yourself to Help Mankind, is at the heart of everything we do. At QNET, we believe in the inherent potential of every individual. It’s this potential that pushes us to rise ABOVE & BEYOND our challenges, towards a brighter future.

Through our various initiatives across India, we aim to make a difference in the lives of those in need. From providing access to education to children from disadvantaged communities to helping women in rural areas learn new skills to become financially independent, our aim is to make an impact at the grassroots level to help communities transform from within.

RYTHM Foundation is actively supporting around 10 projects all over India right now. We bring you a glimpse into some of them that are already making a difference.

Lighting up the Mountain The stunning region of Ladakh, abundant with natural beauty, is a popular tourist hub. But what most people do not realise is that Ladakh is also home to many tiny village hamlets that are nestled deep in the remote mountains, not easily accessible by road. Due to their inaccessibility, these villages are completely off the national power grid. For centuries, the villagers have lived a rural life where everything comes to a standstill with sunset. Their only source of light for years has been oil and kerosene lamps, which are also health hazards.

RYTHM Foundation partnered with Global Himalayan Expedition (GHE), a social enterprise on a mission to electrify all remote villages of Ladakh, to help bring light into the village of Rongdo, a small hamlet of 300 residents. With the help of RYTHM Foundation’s grant, GHE was able to install a solar power plant that eliminated the need for the village to connect to the power grid. The impact was almost immediate. With the solar-powered lamps bringing light into their homes,  the village’s livelihood improved. In that remote region, the sun disappears as early as 4.30 p.m. and earlier villagers who used to primarily make a living from selling woollen sweaters had to stop work once the sun sets. Now, they could continue knitting well into the night increasing their productivity.

Solar power also brought the internet to this village transforming their lives with laptops and wi-fi connections. Soon this gave rise to another income opportunity: homestays for foreign tourists wanting to experience the Himalayas.

Nurturing a better tomorrow in Manipur 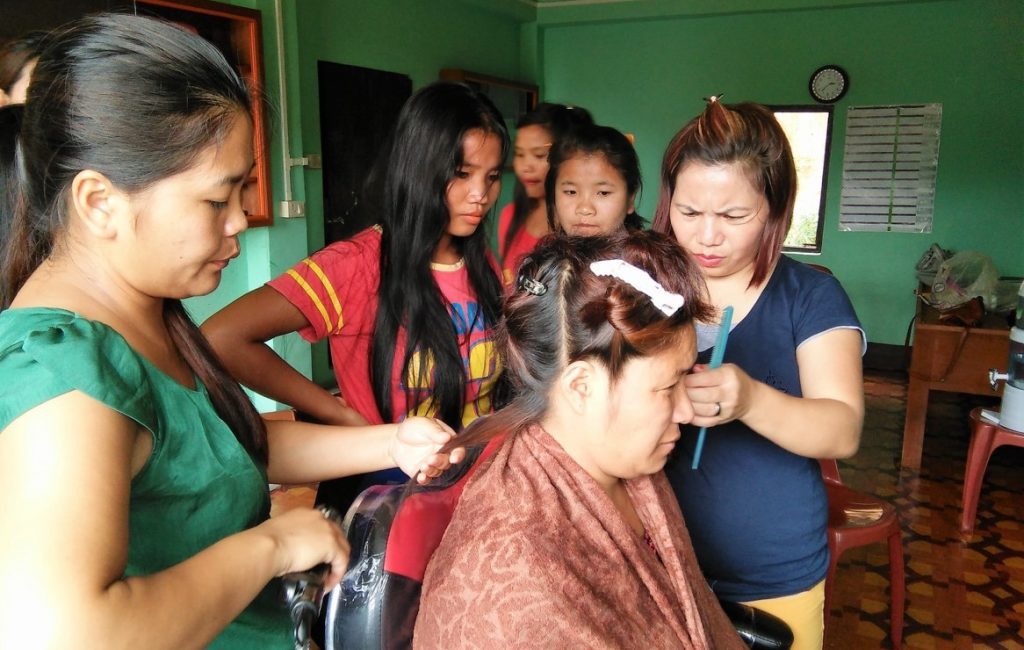 Hejang Misao from the North-Eastern state of Manipur is one of the many social entrepreneurs across India who is being supported by RYTHM Foundation.

Like many teens and youth in Manipur, Hejang was also pulled into the extremist movement as a teenager. “When I was young, there were widespread conflicts among communities. In 1993, I got sucked into the insurgency conflict. Many youngsters like me were force-recruited by the insurgents and sent to training camps. I too was trained in guerrilla warfare. After training, I had the choice to join the insurgent group or defend my village. I chose to stay put and defend my village,” he recalls.

That’s when he decided to commit his life to social service and got a Master’s degree in social work. After graduating, he started Integrated Social & Institutional Development for Empowerment (InSIDE) North East with the aim of helping young people who are the worst affected by the insurgency war. In October 2016, InSIDE North East won the MSDS Fellowship provided by RYTHM Foundation to support promising young social entrepreneurs.

With the support of the fellowship, his organisation started a project called ‘Guns to Pens’ to bring education at the grassroots level which set up book banks and life-skill programs in the villages in the region. They revived the practice of ‘Shom-in’ where village elders impart training to youngsters in areas like cultivation, hunting, village administration etc. InSIDE North East also started several projects for women empowerment which included training programmes in beauty and wellness for young girls, as well as seed funding to rural women mothers to start small businesses. With the funding, these women have started opening their own businesses such as paan shops, or own units for weaving shawls or Mekhalas. At QNET, we strongly believe that when you empower a woman, she has the power to transform not just her family but her community.  RYTHM Foundation has partnered with Parinama Foundation that has been working towards bringing about rural prosperity through sustainable livelihoods for women in marginalised areas of Odisha, Jharkhand, and Bihar.

Most women in the villages in these areas are homemakers and financially dependent on their husbands. Through a microenterprise development program funded by RYTHM Foundation, women in these villages are being trained in mushroom cultivation, and also being educated on nutrition. This new skill has contributed to their financial stability and many of these women are now supporting their entire families. As part of our commitment to work with grassroots organisations in various local communities, we partnered with the Mann Deshi Foundation that is dedicated to the economic empowerment of rural women. RYTHM Foundation has been funding the Mann Deshi Champions Youth Development Centre in rural Maharashtra that helps young girls from low-income families develop skills and knowledge that can help them become independent. The centre conducts workshops and training for girls from low-income families in rural areas of Maharashtra. They receive training in English, personality development, driving, self-defence, and law enforcement. The centre also looks after the overall development of the girls by providing healthy meals, access to a library, sports kits and equipment. Currently, around 800 young girls are being supported as a result of the collaboration between the RYTHM Foundation and Mann Deshi.

20-year-old Kajal Ahiwale from the village of Mann is a testament to the success of this program. Kajal’s father is a farmer who has experienced the debilitating effects of drought in their village first-hand.  It was financially impossible for him to send Kajal to the city for higher education.  And as Kajal’s mother is ill, the entire family relies on her to do the housework and look after her two younger brothers.  To earn a supplemental income to help her family, Kajal started a tailoring business at home while she was still in primary school.

Kajal joined the Mann Deshi Champions Youth Development Centre to train in a skill development programme that prepared girls to join the civil service including the police force. The programme which is completely free of cost included physical training, nutritious meals, and sports attire, among other things. Kajal found herself getting stronger and developing more confidence. She took the Home Guard examination recently and graduated successfully. Today, she is a proud member of the Home Guard in her State and supports her family with her salary. India’s track and field Queen PT Usha established a school for young girls with great athletic potential from rural areas to train in her academy and prepare them competing in the international arena and hopefully win an Olympic medal for the country one day.

RYTHM Foundation has joined hands with the Usha School of Athletics to help make this dream come true. The Foundation provides a full scholarship to 5 young, talented female athletes which covers all their expenses including academics, training, accommodation, sports kits, books, nutritional requirements and anything else they need so that these athletes can focus 100% on working towards their goal. RYTHM Foundation has supported the Cancer Patients Aids Association (CPAA) on several projects to help with detection, prevention and treatment of cancer in Mumbai as well as the marginalised areas of the country where medical help is minimal. RYTHM Foundation has sponsored the treatment of 20 children from low-income families suffering from cancer and has also supported their families the fight against the disease. The foundation along with CPAA also rolled out an early detection programme under which more than 3000 screenings have been conducted and immediate help provided to patients.

Harness the Sphere of Silence to unlock your potential

What every direct seller can learn from Mahatma Gandhi