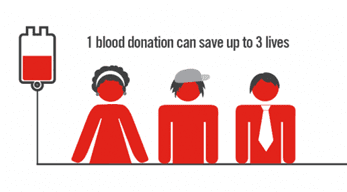 According to a WHO report, India fell short of 1.9 million units of blood last year, which is equivalent to 60 tankers—that could have aided more than 320,000 heart surgeries or 49,000 organ transplants. Given that the eligible donor population of India is more than 512 million, this deficit is surprising. The cause for this is primarily the lack of knowledge about the simple process involved in donating blood, especially in the lesser-developed states and the various unfounded myths that people have harboured over time. Another reason for the shortage of blood is the ban on payment to blood donors that was enacted in 1995.

In order to raise awareness about this shortage and to help educate people about the benefits of blood donation, the Lions Club in Kodigehalli, Dist. 317F Bangalore recently organized a blood donation camp, in partnership with QNet.

Over 50 volunteers, which included employees of QNet and their families, as well as several independent representatives came forward to donate one pint of blood each, at this drive. It is worth noting that one pint of blood can save up to three lives!

Medical professionals strongly believe that benefits of blood donation include: Volunteer from Lions Club, Ms. Deepthi, said, “Donating blood is an opportunity of saving millions of lives. Blood gets purified when you donate it. We should organise more such activities to create awareness of donating blood and nullify any myths around it, to save precious human life.” The collected blood will be appropriately stored by the concerned hospital / blood bank, and used as per medical or emergency needs in Bangalore

QNet volunteer Ramesh Kuma said, “This is a great way to serve the society in a selfless manner. As part of QNet’s CSR activities, blood donation camps will be regularly planned and executed along with Lions Club” Did you know? The WHO recommends that the blood requirement of 1% of a country’s population be used as a ballpark estimate of its blood needs. By this measure, India was short of 1.9 million units of blood, data presented to the Govt. of India, on March 23, 2018.