There was a time when cinnamon was considered more valuable than gold. As it turns out, this aromatic tree bark is equally valuable when it comes to its health benefits. Cinnamon is being researched on and the findings so far have been particularly promising. An extra dash of cinnamon can go a long way in combating many health issues. To give a little bit of background, cinnamon has been used as a medicine in traditional Ayurvedic and Chinese medicine for a really long time in history. It is a spice that is obtained from tree branches of the Cinnamomum family. Native to Caribbean, South America and Southeast Asia, people have been using cinnamon since 2000 BC. It was regarded very beneficial and was widely used by doctors to treat many health conditions. As a spice, cinnamon is usually found in powder form or as whole (pieces of bark). It is also used in essential oil and supplements. Many of cinnamon’s helpful properties originate from one substance called the cinnamaldehyde, which is naturally, abundantly found in cinnamon. Some of the most prominent benefits are as follows:

1. One of the most promising researches point to the health benefits of cinnamon linked with type 2 diabetes. While it is a metabolic disease that has no cure, cinnamon can be used to manage its symptoms. According to Lori Kenyon Farley, a certified Nutrition Consultant, cinnamon can be used to reduce blood pressure while also having a positive effect on blood markers for people with type 2 diabetes. Cinnamon works directly on the muscle cells, forcing them to remove sugar from the bloodstream, converting it to energy. A 2016 research review found that cinnamon supplements along with standard hypoglycemic medications resulted in ‘modest’ improvements on Fasting Plasma Glucose and HbA1c, though more rigorous studies are necessary.

2. A relevant tangent is cinnamon’s possible effect in metabolic disease management. A literature review in the same year found that cinnamon may be effective in reducing morbidity, complications and mortality in metabolic syndrome which include blood pressure, obesity, dyslipidaemia and plasma glucose. But with this case as well, more thorough trials are necessary to come to a confirmed conclusion. Cinnamon can also be used as an appetite suppressant for those with sugar addiction owing to its naturally sweet taste.

3. It has been proven that cinnamon fights fungal, bacterial and viral elements in food. In ancient times, when lack of refrigeration caused food spoilage, both sweet and savoury food used to be flavoured with the spice to prevent that. People who consume cinnamon benefit from the properties as well. Cinnamon has been found to clear mucus, encourage circulation, helping with seasonal coughs to bronchitis. A research review highlighted that cinnamon can prevent bacteria from acting out by damaging cell membranes and changing their lipid profile.

4. While neurological conditions like Alzheimer’s and Parkinson’s diseases are currently incurable, cinnamon can be used in symptom management, which is the primary mode of treating these diseases. Adding cinnamon to daily regime has been shown to help neurons and improve motor function. These changes help people suffering from these two diseases carry on with their daily routines with less difficulty. A 2018 study in Pharmacological Research noted cinnamon’s ability to inhibit tau protein aggregation and amyloid- β peptides which are both trademarks of Alzheimer’s disease.

6. It is possible that consumption of cinnamon could help with reduction of systemic and specific inflammation. Addition of cinnamon to regular diet may reduce systemic inflammation significantly. It could also treat certain kinds of pain and headaches along with arthritis pain. Since cinnamon can also boost circulation, it plays a double role in arthritis pain by stimulating and pushing circulation to the joints. 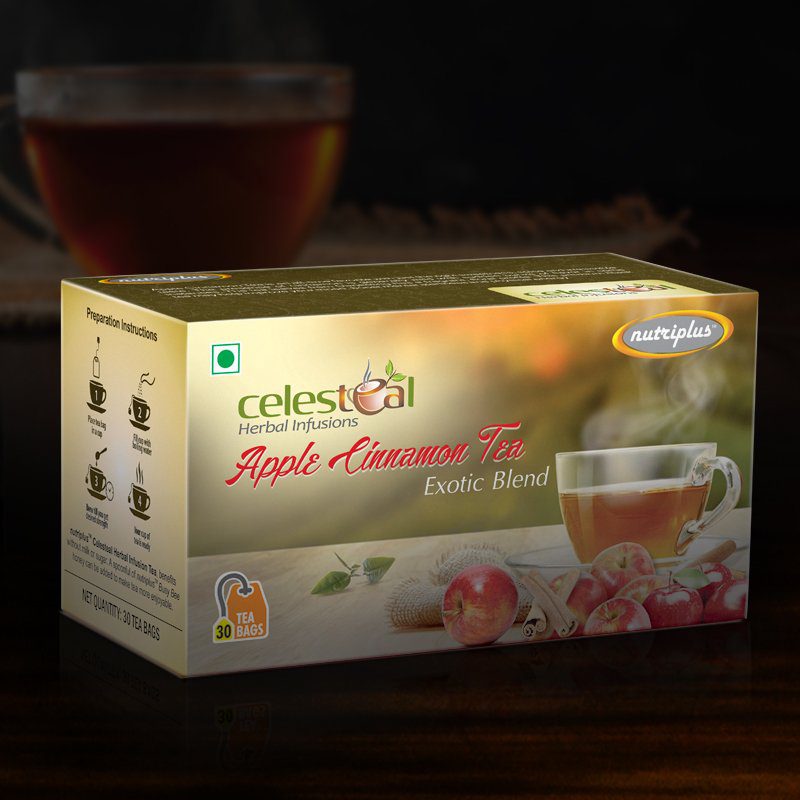 You can experience the myriad health benefits of cinnamon by indulging in the delicious Nutriplus Celesteal Apple Cinnamon Tea, one of the best black tea variants among the QNET products. It is filled with aromatic cinnamon goodness with alluring notes of apple. It is a perfect blend of Darjeeling tea leaves, handpicked South Indian cinnamon bark and imported apples from Germany. This delectable tea can be consumed both hot and cold, and can easily be your everyday pick-me-up.